paranoia, the baseless fear that there is an evil plot against you; that people you see pass by your house are spies who are part of the conspiracy. 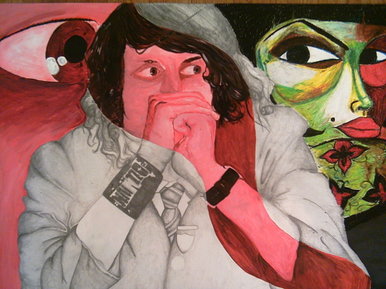 when i am in a public place like a cafeteria or restaurant, and see a group of people in a huddle — i was certain they were talking about me.  they weren’t saying good things about me, but nasty, unkind things.  sometimes, alone in my bedroom, i could even hear them talking, i could hear their voices through the walls.

but my nastiest and most horrifying experience of paranoia was seeing (in my peripheral vision, when i look slightly down) the faces of people sitting across from me melt and disfigure into hideous demons frowning at me.

all this was a result of drug abuse.  i had already quit.  i was already into rehab.  but the damage that drugs have caused in my brain’s perceptions of reality remained.  my problem wasn’t merely psychological, it was physiological — drugs have messed up my brain’s bio-chemical equilibrium.

i was regularly injected with an anti-psychotic drug to correct the chemical imbalance in my brain that caused the hallucinations — the paranoia.  i was also given depressants to slow down my thoughts and make me droopy and drowsy, unable (now) to further conceive conspiracy theories.

after six months or so of drug treatment, the chemical imbalance was corrected and my brain had altogether ceased from inventing malevolent plots plotted against me… and involuntarily conjuring up frowning demon faces.