i am profusely and profoundly thankful to God for his timely intervention in my affairs today.

i endangered the well-being of my middle daughter and 3 year old grandson; and could have burned our small house down. it would have been (i am extremely relieved nothing serious happened, my head is still spinning with vague dread for what could have been) a result of careless inadvertence, absence of mind, and hurry.

i was in a hurry to get out of the house to pick up my youngest daughter from school (she’s a teacher). i was lagging behind schedule.

i had messaged her that i will leave as soon as the fried chicken was done. the clock was ticking.

as soon as the chicken looked cooked enough, i drew the pieces out of the frying pan with a pair of steel tongs and put them on a metal strainer. i put the metal strainer back on top of the frying pan, above oil level, supported underneath by the open steel tongs, to let the oil drip back to the pan. i covered the chicken and did not leave it exposed.

my daughter and grandson were in our bedroom, it was my grandson’s naptime. the air condition was on because of the summer heat.

i left the house to fetch my youngest daughter from school. after about a kilometer out, i got a call on my cell phone, but couldn’t answer it because i was driving.

after another five hundred meters, i got a text message. i stopped the car and pulled aside to check: my youngest daughter said she was called to a meeting and would be out an hour later; that i should just pick her up then.

i turn the car around and proceed back home.

when i opened the front door, the entire kitchen was filled with smoke! it was coming from the gas stove — the oil on the frying pan was turning out smoke up to the ceiling, filling the entire kitchen. a smoke alarm!

i immediately turned off the gas stove. all my joints and inward parts were trembling — trembling at the thought of what could have happened, had my daughter not been called to the meeting and had not sent a text message in time for me to read and return back home.

i turned on a couple of electric fans to blow the smoke out the front door. i positioned both fans to face the front door and act as exhaust fans.

as i turned the body of one of the stand fans, i heard a loud grinding sound coming from inside the fan and the fan began to quake and swivel uncontrollablyfrom its base — one of the fan blades broke off at high speed! 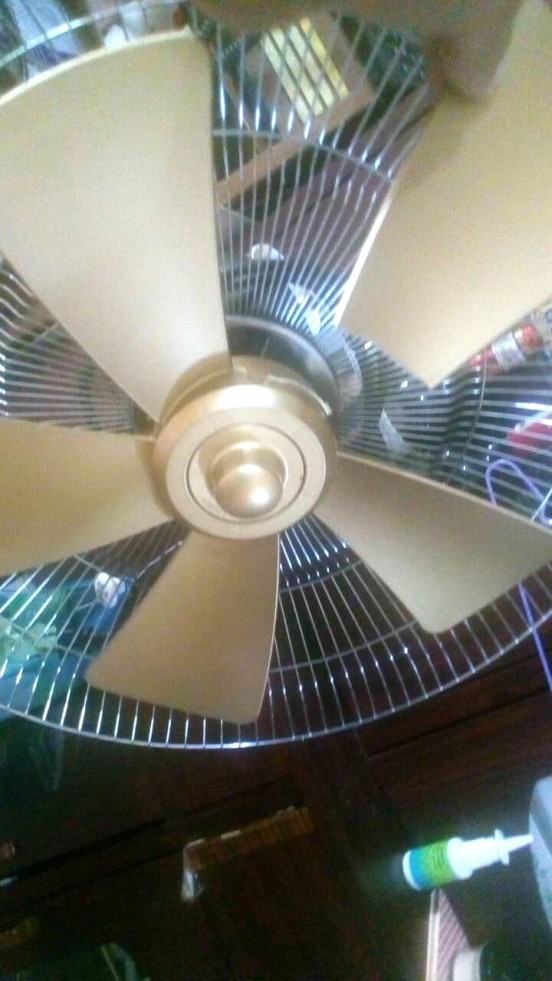 it was an evil day — a day of disaster. but God’s kind intervention thwarted what could have been a huge one, and the fault was mine.

i take all this to heart. lesson learned:

to always check if i’ve turned off the fire after cooking (i am the cook, it’s my SOP);

to check if i’ve turned off the fire, especially when i am in a hurry to go out of the house;

thinking of putting a smoke alarm in the kitchen.

God is good. God is my refuge.