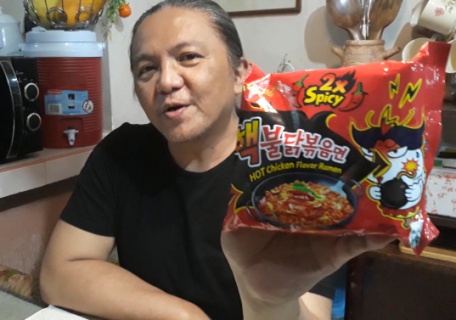 it’s the one featuring the ‘samyang’ brand ‘HOT chicken flavor ramen’ with a ‘2x spicy’ printed on a red package.  the original challenge was (i think) to eat as much spicy hot noodles in the shortest possible time — a race.  but for my purpose, i simplified it to finishing a pack of the spicy hot noodles and posting the video online.

my experience.  on the first mouthful, the taste was a mixture of sweet and savoury followed immediately by a burning sensation in my mouth (tongue, cheek, and all).  the next mouthfuls were searing hot, an intense nuclear fire in my mouth.  the only relief i got was in between mouthfuls, when i can momentarily breathe, talk, and be happy i’m still alive!  the next mouthfuls were more incendiary than the ones before it, because the ones before left the inside of my mouth still aflame.  by the fourth mouthful, i have already developed beads of sweat on my forehead and my entire face felt flushed and sweating profusely.  i could hardly manage a smile — game face on.  though the spicy noodles didn’t bring me to tears (as it did some subjects), my mouth was all singed — my cheeks were swelling, and i thought my tongue would fall off!

i did not drink water (which i know worsens the condition), or milk, or eat ice cream to quell the conflagration.  five minutes after i finished the challenge, my mouth was still stinging with spicy heat.

a friend reminded me after watching the video i posted, “isn’t that contrary to keto?“  i said, “it’s my cheat day!”

i just issued a challenge to (nominated) two of my facebook friends, gerry munda (one of my best friends in high school.  he found a korean store that sold the samyang 2x spicy and bought a couple of packs.  i asked him to also buy me a couple), and philip cu (a fil-chi friend, a foodie who i know loves spicy hot food, now based in SG).  awaiting their video…

was the challenge worth it?  yes, every mouthful!  😋😋